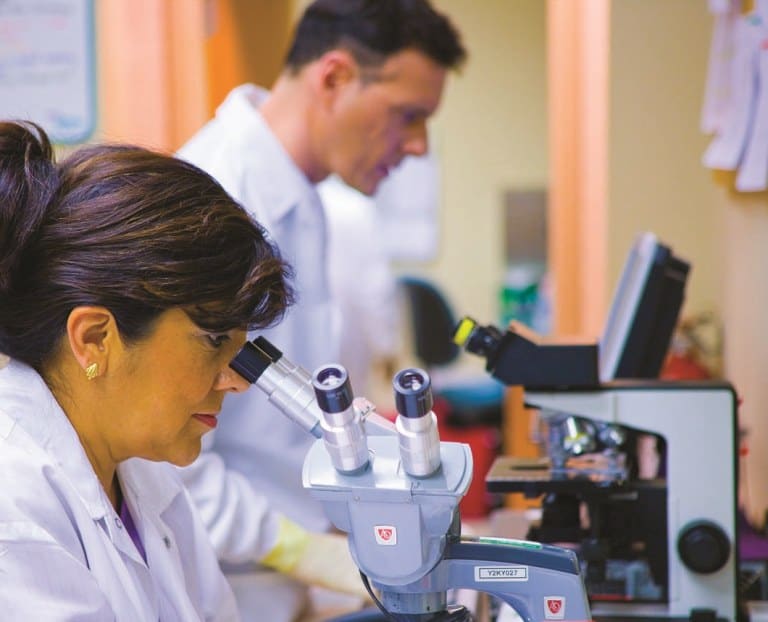 Benign (non-cancerous) blood disorders can include disorders of red blood cells, white blood cells, platelets, the immune system and blood clotting. Many of our physicians, across our statewide network, are trained in both hematology and medical oncology and are board certified in both disciplines.

The most common benign blood disorder is anemia, which affects more than 3 million Americans, according to the National Heart, Lung, and Blood Institute.

Anemia is a deficiency of red blood cells or hemoglobin in the blood. Common symptoms include:

Anemia can affect women during pregnancy or child-bearing years. Pregnancy and childbirth consume a great deal of iron and thus can result in pregnancy-related anemia.

Anemia can be caused by a number of different things, including the following:

Iron Deficiency Anemia. The most common form of anemia, iron deficiency anemia usually is caused by blood loss from things like menstrual bleeding or intestinal bleeding. Sometimes it can also be caused by failure to absorb iron in the diet or by restrictive diets. Treatment of iron deficiency often involves replacing iron, often with tablets or intravenous formulations of iron. In addition, identifying and stopping the cause of the blood loss may be important.

Aplastic anemia is a rare condition in which the bone marrow stops making enough red blood cells. Aplastic anemia can be a result of medications, toxin exposures, or an autoimmune process. A bone marrow biopsy is required to make the diagnosis. Avoidance of precipitating factors, immune suppressive therapies, and bone marrow transplantation can be used to treat the disease.

Hemolytic anemia occurs when red blood cells are destroyed in the blood stream or spleen. Hemolytic anemias can be caused by infections, autoimmune disorders, medication reactions, or heart disease, among others. Treatment often addresses the underlying cause. Sometimes corticosteroid medications are necessary.

Bleeding disorders are conditions in which blood does not clot properly, which can cause excessive bleeding, both internally and as a result of injury. At Rocky Mountain Cancer Centers, our hematologists are experts at treating bleeding disorders, including hemophilia and von Willebrand disease.

Hemophilia is a genetic disorder, which primarily affects males. Excessive bleeding can occur internally, into joints and muscles, or externally, from minor cuts, dental procedures or trauma. Enormous progress in hemophilia treatment in recent decades has replaced transfusions of human blood as the most common treatment for hemophilia. Now, a common and highly effective treatment is a synthetic, concentrated clotting factor, which is administered intravenously. In addition, many patients benefit from treatment with a synthetic version of vasopressin, a hormone that helps stop bleeding. In patients with mild hemophilia, it can be used for joint and muscle bleeds, for bleeding in the mucous membranes of the nose and mouth, and before and after surgery.

Von Willebrand Disease is a condition, most often inherited, in which there is a deficiency in a protein that is important in blood clotting. Treatment generally focuses on stopping or preventing bleeding episodes, often using a synthetic hormone, similar to the natural hormone vasopressin, which controls bleeding.

Achieving the right balance of bleeding and clotting is the job of certain cells and proteins within the body. We want the blood to flow freely through the vessels-arteries, veins, and capillaries – but not to flow freely when we sustain an injury on the ski slopes or an accidental laceration from a kitchen knife. Sometimes the blood clotting system does not function correctly, and people suffer the consequences of blood clots in the veins (venous thrombosis), arteries of the brain (stroke), arteries of the heart (myocardial infarction), among other locations. In some cases, a tendency to excessive blood clotting is inherited. Other times we bring it upon ourselves, such as when we let blood pressure or cholesterol be too high for too long.

Deep Vein Thrombosis occurs when a blood clot develops in a vein deep in the body, often in the legs.

Pulmonary Embolism is a blood clot in the lung, which most often has traveled from elsewhere in the body.

Antiphospholipid Antibody Syndrome is an autoimmune disorder in which autoantibodies greatly increase the risk of both arterial and venous blood clots.

Many other hypercoagulable states can predispose a person to get blood clots.

The main job of the bone marrow is to manufacture blood cells – the white blood cells, red blood cells, and platelets that we all need to survive. Sometimes the manufacturing process goes awry, leading to failure of normal development of blood cells. The diseases in which this process goes awry are called myelodyisplastic syndromes (MDS). Patients with MDS have low blood counts, which can make patients ill. Patients with MDS can get infections from low white blood cells, fatigue and shortness of breath from anemia (low red blood cells), and excessive bleeding from low platelets.  Treatment may include blood transfusions, medications to help stimulate the production of blood cells, or medications that suppress the immune system.

Other blood disorders we treat at Rocky Mountain Cancer Centers include: